Energy For
The Future

SolarBio Energy started with a bold mission: to foster sustainable development and to create a better and cleaner earth for future generations by bringing energy to millions of people worldwide.

In recent years, we have grown into one of the world’s largest solar based and chemical energy solutions providers.

We provide essential materials needed in the process of clean energy to many of the biggest solar companies in the world.

We aquire and produce materials such as; Silicon for the solar cells, Chemicals required to make the PV Glass, Lithium for the batteries and Gases required in the production process

With a rich environment of chemicals and over 70% of the world's lithium resources locally, Chile has the world’s largest known lithium & chemical reserves estimated at 14 million tons.
Read More

Most raw materials are commercially produced from either the extraction of salts & chemicals from underground brine reservoirs or the mining of mineral containing rock.
Read More

Most storage systems currently in operation around the world use lithium batteries. Flow batteries are one of the best solutions in development for the future of storage.
Read More

SolarBio Energy are experts in Solar Energy, Lithium and various chemicals used in the energy process. One of the fastest-growing areas in the speciality chemicals business is aimed towards solar and clean energy. SolarBio Energy is able to execute an ambitious growth strategy because of its unique natural resource position, derivatization capabilities, and technological leadership.

We manage a varied and high-quality network of natural resources that are strategically located in low-risk areas with well-developed infrastructure. Our operations' size allow us to take advantage of favorable economies of scale.

From raw material extraction through specialist product manufacturing, we have the strongest vertical position in the business. Our process technology expertise is deep and diverse, and it has increased in scale as a result of our recent acquisitions.

We are the most stable and sustainable supply network in the market because of our unparalleled presence and enormous manufacturing capacity, which is currently expanding. We offer the most affordable lithium carbonate and lithium hydroxide while maintaining the greatest quality. Because our unique position is difficult to copy and took a century to create, we can maintain the SolarBio Energy advantage.

Lithium is one of Earth’s most widespread elements. The metal is found just about everywhere, even in small traces in drinking water. It’s a key element in the batteries that experts say could guide us to zero-emission electricity and transportation. That is, if it can be mined fast enough.

How is Silica Mined

Individual Investor
Fully managed. Individual retail investors can still become part of our team. We are partnered with financial investment firms that handle our individual investors grouped together.
Find Out More
Corporate Investor
For corporate investing please get in touch with one our experts by email with your proposition. Send your company details and contact information to investors@solarbioenergy.com
Find Out More

Also called silica sand or quartz sand, silica is silicon dioxide (SiO2). Silicon compounds are the most significant component of the Earth’s crust. Since sand is plentiful, easy to mine and relatively easy to process, it is the primary ore source of silicon.

Silicon (Si) is a semi-metallic or metalloid, because it has several of the metallic characteristics. Silicon is never found in its natural state, but rather in combination with oxygen as the silicate ion SiO44- in silica-rich rocks such as obsidian, granite, diorite, and sandstone. Feldspar and quartz are the most significant silicate minerals. Silicon alloys include a variety of metals, including iron, aluminum, copper, nickel, manganese and ferrochromium.

The chemical properties of silicon have some special characteristics, especially the crystalline form of the semiconductor. Besides, the principal design parameters for solar cell manufacturing are bandgap energy and minority carrier diffusion. So, the objective of a solar panel is to absorb light with the semiconductor, which is the reason for using silicon.

Let’s understand the matter. Silicon is one of the highest quality semiconductors that is ideal for solar cell production.

The superior quality of silicon’s electronic, optical, thermal, and environmental properties are best for producing solar cells. Also, the availability and affordability make it more usable for solar panels.

The process begins by drilling down through the crust and then pumping the brine up to the surface into evaporation pools, where it is left for months at a time. This creates a salty mud comprised of a mixture of manganese, potassium, borax and lithium salts, which are then moved to another open-air evaporation pool. Most of the world’s lithium is extracted from a mineral-rich brine around ten metres beneath the briny lakes of high-altitude salt flats.

After 12-18 months, the mixture is sufficiently distilled to extract the lithium carbonate, the main raw material used in lithium ion batteries. This method of extraction is commonly used in the so-called ‘Lithium Triangle’ that straddles Bolivia, Chile and Argentina. This method is favourable due to its low cost and effectiveness in extracting lithium carbonate. However, the process is extremely water intensive.

Lithium is a highly reactive alkali metal that offers excellent heat and electrical conductivity. These properties make it particularly useful for the manufacture of glass, high-temperature lubricants, chemicals, pharmaceuticals, and lithium ion batteries for electric cars and consumer electronics. However, because of its high reactivity, pure elemental lithium is not found in nature but is instead present as a constituent of salts or other compounds.

These products usually are of battery grade (99.5% purity) and could be further processed to produce high purity compounds (99.9%) by redissolution, ion exchange, and reprecipitation steps. Salar brines are currently used as dominant feedstock for the production of lithium compounds around the world principally due to low operation cost and high reserves as compared to those from mineral sources.

Carbonation using soda ash or carbon dioxide is preferred to precipitate lithium carbonate as the final product whereas lithium hydroxide is frequently recovered via electrodialysis and crystallization.

Most storage systems currently in operation around the world use lithium batteries. The world of lithium batteries features a diverse group of technologies that all store energy by using lithium ions, particles with a free positive charge that can easily react with other elements

The charging and discharging of lithium batteries, which are made up of a positive electrode (lithium cathode) and a negative electrode (carbon anode), happens through chemical reactions that allow energy, in this case generated by renewable plants, to be accumulated and restored.

Lithium batteries have very interesting technological features for energy purposes, including modularity, high energy density and high charging and discharging efficiency, which can exceed 90% on a singular module level.

We are the most stable and sustainable supply network in the market because of our unparalleled presence and enormous manufacturing capacity, which is currently expanding. We offer the most affordable lithium carbonate and lithium hydroxide while maintaining the greatest quality. Because our unique position is difficult to copy and took a century to create, we can maintain the SolarBio Energy advantage.

Two factors determine the price of lithium, and first we need to consider abundance. There’s only as limited supply of this element, because it only makes up 0.0007 percent of the Earth’s crust. Chile produces most of the element for the world market, with Australia coming in second. In the US you can only find a single mine in the whole country. It doesn’t occur naturally in elemental form, either.

What these things all mean is that the demand for lithium-ion batteries will rise even further. The price of lithium carbonate is up by 47% from 2015 and the year 2017 will see increased sales of pure electric cars. Add the fact that Li-ion batteries are also used for mobile devices such as smartphones, tablets, laptops, and other wearable devices, and the demand for the commodity will surely increase as well. 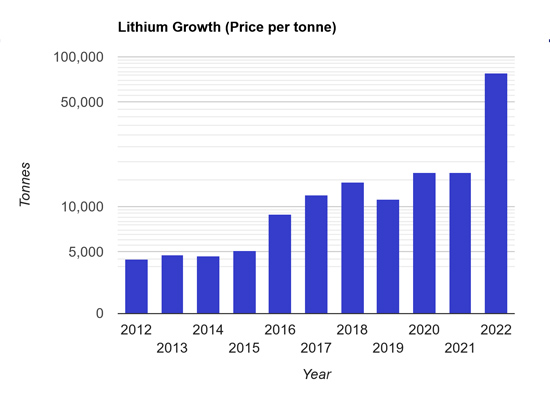 We aim to produce high-quality, low-cost lithium products to fuel a global, low-carbon economy. As we build and operate lithium mining and chemical processing facilities, we will adhere to the highest standards of sustainability monitoring, compliance and reporting.

Moving towards the next phases of project development in Chile, we recognize that the sustainability topics outlined in this report have the potential to shift in nature, scope and scale and we commit to continuing our efforts to embed sustainability into the way that we do business

We are driven to embed our commitment to enviromental and sustainability practices into our operations across both of our Projects. This includes establishing governance structures at a corporate level that will enable us to manage our impacts in line with the expectations of our stakeholders.

We aim to instill a culture of accountability and transparency at the corporate level that will set the expectations for our Projects as they progress through feasibility, permitting and construction into production .

Global presence with sales and offices in over 15 countries worldwide.

Robust Growth and Profitability with our dedicated global partners.

We use designated financial consulting firms that handles all of our investors. Please contact us or Download our BROCHURE to find out more information.